Remember the Three Word Challenge from way back when? (If not, you can read about it over here and here too ) Well, I'd been wanting to have author duo CL Raven do a guest blog for me and tell you all about their cool stories and webisode series, but I wanted to make it super fun and super special. I asked them if they would be willing to accept a Three Word Challenge of their own, and since they are brilliant, funny, and excellent eggs/team players, they graciously accepted!

CL Raven's work is full of dark humor and the kinds of flavor you might find in works of Alfred Hitchcock and Edgar Allan Poe. Here they are (aren't they gorgeous?! Uh, the girls, not the dead old man writers ;P) 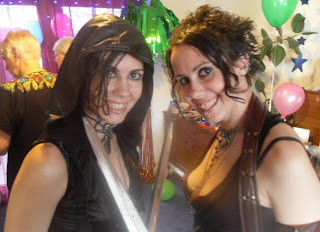 You can join them on twitter and facebook  (I try to stalk them daily at both locations, I won't lie!)
Facebook
Twitter
So I gave them the words "blackjack", "cistern", and "braid" for their Three Word Challenge...

Without further ado, here is what they came up with for your entertainment...


He's coming for me.


I know him only as Blackjack. The press adopted this nickname because he kills women on their twenty first birthday. Mine's tomorrow. A week ago I received a birthday card.
To Seren. Thinking of you. Blackjack x
Inside was an ace of spades playing card. As cards go, it wasn't the creepiest I've ever had - that accolade belongs to one my ex gave me. 'To my girlfriend. You is well hot'. I'd tolerated his smelly feet, love of football and his insistence of dyeing himself to the colour of an Oopma-Loompa for the summer, but that card was the last straw. He's lucky he didn't join it shredded in a bin bag.


I should've phoned the police, but they'd have just put a squad car outside my house. They did that for his last victim - I was in that car, watching the street while he gave her the key to death's door.


If Blackjack wants my life, he'll have to fight me for it.


I wake, surprised I haven't been butchered; my organs dangling from some "21st!" balloons, my fingers used as substitute birthday candles. That would really spoil my cake. It's sunny outside - not the weather you'd associate with a serial killer's imminent arrival like the worst birthday entertainer ever. At least he's not a clown.


I dress and head downstairs, strangling my braid with a band topped by a black bow and a skull. A card sits on the hall floor, looking as innocent as a politician caught in a brothel raid.


I open the envelope. The card has an adorable puppy on it wearing a party hat.
To my favourite girl. Have a great day. It will be your last. Blackjack x


Paper falls out and I pick it up. It's a page from a diary - today's date. Seren's 21st birthday is scrawled on it with a balloon. I suppose I should be grateful he remembered. My ex rarely did. I turn the page over. A week after my birthday he's written Seren's funeral. My gratitude vanishes faster than a snowman in a heat wave. I'll boycott my funeral. I don't have anything to wear.


Every time the door knocks, my heart dies. It's hard enjoying presents when you're convinced each gift will contain methods of execution. It's almost anti-climactic to receive gift vouchers.


Night falls as swiftly and silently as a guillotine blade. The phone rings. I answer it to hear a musical card playing 'Happy Birthday'. I slam the phone down. Those cards are always out of tune.


An eye stares back.


I leap backwards, swearing. I know he can't see me, but it feels like he stared straight at me. I risk another look.


I hurry to the kitchen window and switch on the lights outside. Shadows emerge to dance in the spotlight of the garden stage. He's not there. I lean over the sink to check the blind spot. He appears at the window, hands pressed against it as he peers in. I drop to the floor, squeezing myself as close to the cupboard as possible without climbing in and hiding amongst the fabric conditioner. By switching on the lights, I've told him I'm home.


I crawl out of the kitchen, my heart pounding out my own funeral track as I huddle against the wall. His footsteps clump as he searches for an entrance. My shaking hands grip the knife and my pepper spray. I've seen what he did to those other girls. I won't let him do that to me. I will not be one of his victims, my name known only for the brutal way I was murdered. That will not be my legacy.


The front door clicks. I scream in silence, my mind voicing what my mouth can't. I curse leaving the spare key behind the drainpipe. I try calming the tempest in my brain. His shadow slinks along the wall then he appears. And smiles.


"Happy birthday Seren. You're going to get the best present - to stay twenty one forever."


I squirt my pepper spray into his eyes. He yells and rubs them.


"You'll suffer for that." He lifts the hand holding a parcel. "I got you a present."


"I hope you kept the receipt."


It's the same present he bought the other girls - a traditional 21 key that was stamped so hard onto their backs it had to be prised off, the wound unhealed as they died. That was before the twenty one different wounds he inflicted on them.


"The only key I want is the one to your funeral home."


I thrust the knife into his chest and twist it. He gasps and glances down, stunned by the sight of his own blood. He grabs me, flinging me against the wall. I bang my head, blue lights dancing in my vision. He unwraps the present as I crawl towards the kitchen. He grabs my leg. I kick, struggling and screaming. He drags me towards him so I press my toes against his stab wound until he lets go. I scramble up and run for the downstairs toilet. I wrench the cistern lid off and rescue the sharpened 21 key hidden inside. The only thing this will open is his jugular.


He stands in the kitchen holding his key and a bag.


"It's very ungrateful to refuse a present."


I swing the key at him, anticipating his duck. I stab it into his neck. I wrench it free as blood spurts over my kitchen. He clutches the wound, gurgling as he drops to his knees. Once he's on the floor, I hack his shirt off, grab my knife and carve my parting gift into his back.


21 or BUST.
Were you nibbling your nails or chewing your lip while reading that?!! Cause that's what I find myself doing all the TIME when I read works by these lovely ladies! If you want more CL Raven (and I kind of can't help myself, honestly...I'm not usually a fan of horror, but there is something more than a little addicting about their work...) check out "Gunning Down Romance" (a collection of short stories about love gone terribly, horribly wrong) "Disenchanted", (a collection of fairy tales retold in the cleverest ways possible) and their full length novel, "Soul Asylum." (Mystery and Death live side by side in an ancient mental asylum! Who will survive? Who won't?)
Gunning Down Romance for Amazon   Gunning Down Romance for Smashwords
Disenchanted for Amazon                      Disenchanted for Smashwords
Soul Asylum for Amazon                       Soul Asylum for Smashwords
In addition to their written works, the duo is two thirds of the hilarious web series Calamityville Horror. The girls and their handsome and goofy sidekick Ryan wend their way through historical and haunted properties located in Wales. Check them out over here!
Calamityville Horror on Facebook        and    Calamityville Horror on Twitter
For all updates on works in progress, Gimpic Game Adventures, Animal Army foibles, and other awesomeness, please check out CL Raven's Blog
Big thanks, cwtches, and high-fives to Cat and Lynx Raven for being on my blog today!
Posted by Girl From Nowhere at 10:12 PM